hi - was just wondering if, for instance, says the quality of the integrated souundcard in Mikes new mixer for instance, would be considered as good as the Focusrite’s stand alone soundcard?

Hi David, David here.
The more correct term you are meaning is Audio Interface. You might have seen people say they have an M-Audio or Presonus, or in the case of Mike and myself, a Focusrite.
They’re not quite the same as a soundcard as such. And most ‘soundcards’ these days are integrated onto the mainboard in the PC.
As an example, you won’t even get Pro Tools running if it doesn’t find an audio Interface. A soundcard won’t cut it as far as Pro Tools in concerned.

Now I’ve blurted on about that, getting back to your real question:

As Mike has said before, Focusrite make excellent products. I use one too and definitely recommend it.

I hope I have been of some help

yeah, that was very useful actually. I run two Focusrite interfaces (correct terminology now!). I Was trying to gain opinion as to whether the mixers such as Mike’s Soundcraft or the Yamaha’s were of equal quality to the Focusrite, or if I’d be sacrificing any quality. Thanks David

@David It all comes down on converters. More expensive mixers have great preamps and great converters. I have two Focusrite Scarlett audio interfaces, but there are better ones, but for my needs these two are great. Also there is another thing, does your usb interface on mixer just sending master channel or you can see all of the channels you have and that comes down to money. I don’t believe that we would notice any difference if Mike goes directly from he’s soundcraft to Mac, maybe it would be even better because he has 4 gain stages this way.
So to conclude, Behringer producer consoles should sound great because they use Midas preamps and other parts, Presonus, Midas, Allen & Heat, Soundcraft, etc… but behringer Xeny not so much, I have one, and it has bad and cheep parts.

Can confirm, While Xenyx mixers are inexpensive and look “professional” they are rather useless, adding a lot of noise to the signal chain. I would highly recommend going for a Focusrite interface instead, it’s a bit more expensive than a Xenyx but definitely worth it for the jump in quality.

I’ll add that I have had great experiences with the following manufacturers:

morning Mike. So really my dilemma is this…by replacing my old Yamaha (which has great pre’s but no audio interface and is not USB), would I be gaining anything? If I bought your Soundcraft desk, I could do away with my 2i4 which I currently have to use to bring the audio in to my mixer, thus making my lineup simpler right? Is the interface in your Soundcraft equal to the Scarlet? Looking forward to 2pm! D

Exactly. If you had a mixing desk like the one I use you could absolutely do away with your audio interface and use this as your sole audio interface.

The Soundcraft Signature 12 MTK has something called “USB Return” so you can select the output of any fader to be either the input that is plugged in to the channel of the computer assigned output number for that channel.

I still use a Scarlett 2i2 in my setup and have it plugged into a mixing desk channel. The reason for this is I get a very simple “what you hear” feed from my iMac on one fader for when I’m live streaming.

this info is brilliant!! I am making headway now. Like you, I would still use a Scarlet as my signal out of the desk needs to go out to Nicecast when I broadcast live https://itunes.apple.com/gb/podcast/after-hours-on-solar-radio-david-lewis-sunday-30th/id1123446957?i=1000390458563&mt=2. I think I may look at you desk as the next purchase for the studio. I saw on Friday that any of the faders came up in Audition…this would be the case in Traktor too which is great to know. I prepare all my tracks in Audition then load in Traktor when when live. Cheers Mike

Great to hear this David.

I cannot say enough good things about the Soundcraft Signature 12 MTK. I searched long and hard to find a mixing desk that can do all it can do and at that price range too.

Any audio software that can see all your audio inputs and outputs will work a dream. So, like you say, it’ll work with Traktor or screen recording software like Screenflow.

I ran into a bump in the road with Obs Studio. It will only see the first two channels of any selected audio device. Luckily I solved that with Loopback from Rogue Amoeba - a quality bit of software for macOS.

ok…good enough for me Mike. When I upgrade, Soundcraft it will be! Brilliant topic today. Got interrupted so will watch the end later. As you can tell from that link I sent you, I think my audio is pretty good already. I go out live, then record the show as a wav in Audition (Nicecast also gives me an AIFF file too). I then save the wav to MP3 and upload for Podbean & Mixcloud.

I just got the Tascam UH-7000 I love it and the interface
The sound is very clean Best upgrade yet! 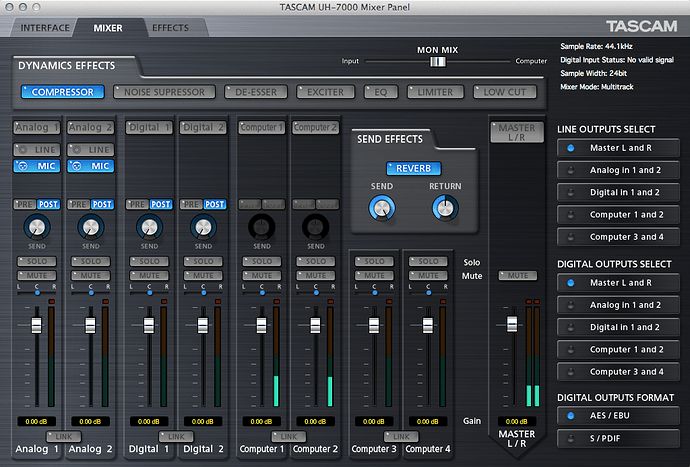 Audio interfaces are not usually famed for the software that comes along with them. That TASCAM UH-7000 Mixer Panel looks like something I could actually use

Some clarification required. A sound card converts digital audio signals to analog signals and sends it to your speakers/headphones. This is referred to as D/A conversion.

It also takes in analog signals from microphones etc and converts them into digital signals. A/D conversion.

An Audio Interface does much the same but is more sophisticated with manual control over sampling, Clocking. MIDI SMTPE, Buffering and encoding and supports firmware updates and driver support…

That’s a brilliant price for the build quality alone.
The Mackie ProFX16 just nudges it in front for me just for the Mic pres and compressors Great for a Podcast Studio.

Mackie is a brand of the United States based company LOUD Technologies. For many years the Mackie brand has been synonymous with some of the best ﻿mixing consoles, PA equipment﻿﻿ and more.