Sound Treating/Proofing – Still Worth It?

I recently rented/moved into a very old (100+ year) apartment and I’m trying to convert the spare bedroom into a studio. Well, home office by day, “studio” by night. The goal is to launch a podcast, do some voiceover work and maybe a bit of light streaming/content creation.

See attached pic to get a better idea of the space, and attached audio clip to hear what it currently sounds like (note that I will be upgrading my mic and getting some proper audio equipment over the next few weeks. The attached is a raw recording on an entry level mic, the Blue Yeti).

A friend of mine is a general contractor and has kindly offered to help me sound treat the room. Before we spend time and money on that, however, I have one big concern – noise in the room itself.

The heating comes in through these old school vents and when the thermostat kicks in, which is about every 3 minutes, it sounds like a small plane is taking off in the room. The sound of rain drops can also be clearly be heard through the windows (I’m British but I live in Vancouver so it rains most of the time, same as back home…). The apartment creeks and makes random noises…constantly. And my computer fans are also audible, especially at high loads.

With a bit of learning/research, hopefully a lot of that these issues can be minimized in post for the podcast, voice overs and video recording. I recently got my hands on an Nvidia RTX 3080 and I found out there is a relatively new broadcast plugin called Nvidia RTX Voice which uses the GPU to remove background audio, and apparently it does a good job of getting rid of it.

(Side note, I wonder if I can use that when recording (not broadcasting) to save time on post production…?)

So, my question is… is it worth spending (what could end up being a lot of) money on sound tiles, thick curtains, acoustic panels, foam ceiling tiles etc etc, to treat the room, when none of it will do anything to stop the background noise? (Keeping in mind that I’ll probably only be living here for another 12 months.)

If it will make a difference, I’ll go for it. 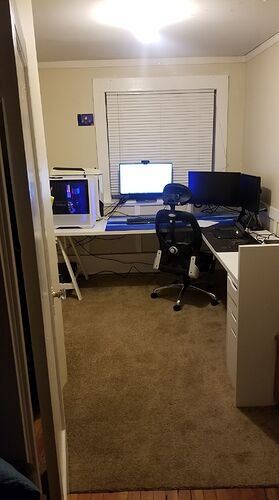 It didn’t let me attach 2 items, so I could only upload the pic and not the audio clip

I think you have a couple of options here as some sort of room treatment is better than none when it comes to producing any audio.

Because of the possibility of moving home again, I wouldn’t spend time and money trying to improve the whole room. I would suggest one option is to go down the route of using some combination of portable wall/ceiling acoustic tiles/baffles. A couple of these placed in the appropriate areas can make a huge difference. You can make these yourself or buy prefabricated versions, add more later on if you feel they are required. You can find designs and materials required on the web. Try to make sure that you can source the correct materials for you tiles/baffles otherwise the adsorbtion charictaristics won’t be maximized and not work as efficiently as required or expected.
These have the advantage of being flexible with the placement within the room and therefore can be ‘tweaked’ into the best positions for your current enviroment. As these items are movable, they are also easily removable/taken with you when it is time to move onto your next abode, so your investment can go with you!

Another option is to either buy or build a ‘recording booth’. Now this isn’t that difficult either, once again you can get designs for the basic layout of what is required on the web. Don’t forget to allow enough space inside the booth if you are going to be doing ‘VoiceOver’ work for your script to be laid out without getting in the way of the microphone!…

I’ve seen a couple of ‘booths’ which use right-angled treated corners/walls and have two/three free-standing treated room dividers (the type that normally divide office space up into work areas) to help isolate the microphone from the rest of the room and its unwanted noise.

If you decide to do the entire room with treatment, don’t forget to install a ‘floating floor’ properly otherwise the rest is a pretty pointless expense. Also you might be legally required to put the room back to the condition it was in before you rented the apartment - again more expense.