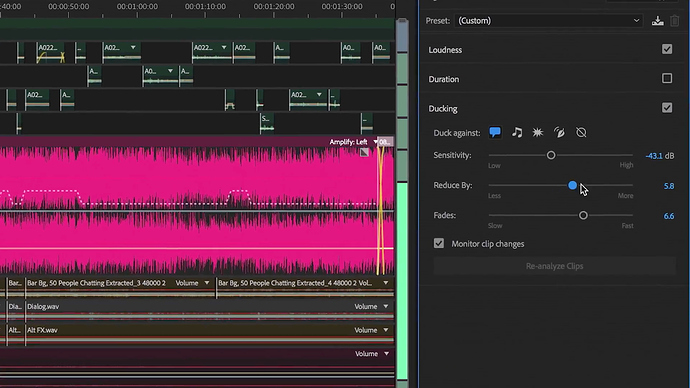 The auto-ducking feature is absolutely killer! A computer algorithm will automatically duck music tracks something that audio producers like us need to do all the time.

No more riding the fader or creating manual envelopes in the next Adobe Audition CC.

Some really neat automations coming next including the ability to move fades together, create symmetrical fades and punch in recordings even quicker in the multitrack view.

Save Time with Up To 400% Faster Mixdowns & Bounces

There’s some magic going on here with mixdowns and bounces in the next Adobe Audition CC happening up to 400% faster. What’s even more impressive is that this will happen “even when sessions contain lots of third-party effects and automation”. If you’re using a ton of plugins and pitch-shifting everywhere on your tracks you’ll be saving more time with the next release!

I’ll make sure to have in depth tutorials on my YouTube channel once the features are released. In the meantime here’s an awesome trailer from Adobe showing off all the latest Adobe Audition CC features coming “later this year”…

I can’t wait for it!

Looks very cool. I wonder if that means it will use less resources on the computer?

That is a very good question @cyberlarson we shall wait and see!

There’s a big reveal with Jason Levine today at 5 PM (UK time) on the Adobe stage at IBC Show, Amsterdam. I’m sure we’ll learn more during this presentation.

I do a lot of phone on-hold work with a music track and auto-duckin will be a time-saver!

Is there a date for “Later this Year”?

I have no knowledge of the drop date @LifeOfChris but going by past history they often drop around the time of big events. There is Adobe MAX in the calendar for 18-20 October 2017.

We can hope, it may be the case, that we’ll see a little update bubble in under a month from now