Can I add a track to multiple buses in Audition?

Can I add a track to multiple buses in Adobe Audition? Any help will be appreciated. This would make things a lot easier for me.

Totally possible if you create two new bus tracks. Let’s call them Bus A and Bus B.

Zoom so you can see each track’s output. Change the original track so that it routes to Bus A then change Bus A so it will route to Bus B.

I’m curious to hear how you would use this in practice @HUGOMONSTER?

Here’s how it would look in the multitrack: 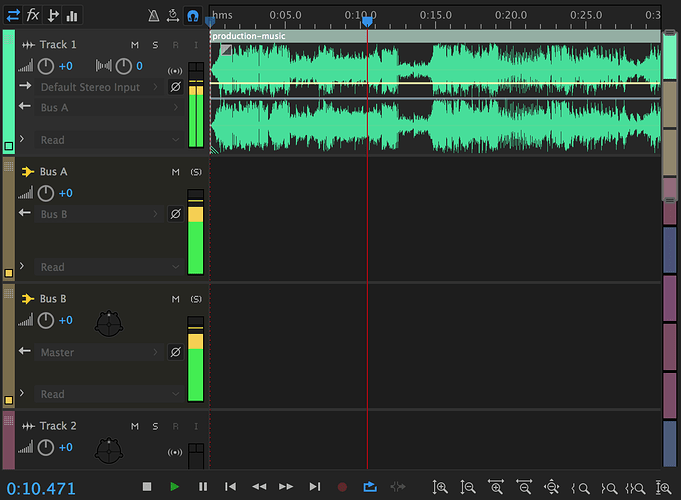 Thanks for responding so quickly. Your a life saver. Sometimes I would like to have a bus to just have a reverb effect that i can apply to a track. I then would also like to have another bus apply another effect to that same track. I know i can add that effect individually, but i’m afraid i’ll be using up too much resources on my computer. is there a better alternative? Am I looking at things incorrectly?

I’ve created exactly what you are after recently in a project where I’ve got multiple busses with an effect on each. Each bus had a different pitch set on it so all I had to do was raise the level on the pitch I wanted. I was able to make my 8-year-old daughter sound like an adult lady or a chipmunk or both at the same time. lol Having 2 busses made that possible.

How I did it was use sends in the mixer to send one track to multiple busses. You can have up to 16 sends. Each bus would have its own effect, (in my case different pitches), with which you can fade them in or out as needed.

I also had a bus with reverb on it that as I faded it up, it put more reverb on. The reverb setting had no dry going out - otherwise, the original sound would be added and the volume increased. Only the wet signal was being outputted.

The example Mike has shown you won’t work as expected (sorry Mike) because in the example he is routeing bus A to Bus B. Anything that happens on Bus A is going to end up on Bus B also. It’s basically chaining effects to each other.

Solution:
Create the number of busses you want.
Send your track to each bus using the send control in the mixer. It’s easier in the mixer I find.

The project I spoke about is not complete as I’ve messed up the sends somehow. Back to pen and paper to do that.

I’ll upload it when I’ve completed it.

thanks a lot fluffman81 i am going to try this out. Currently I have to two buses in a session. each bus has two tracks. I want to to be able to adjust the volume two both buses using a third bus. The reason I am trying to this is because the volume just needs to be adjusted just a little bit and i want to avoid adjusting each bus individually. If I make a mistake on the volume I can just delete the third bus without affecting the volume of the two buses.I hope this makes sense.

It makes perfect sense and is very commonly done for the exact reason you mention which is control volume on more than one track at the same time. A common routing mix setup is having ALL the vocal tracks routed to a VOX bus that controls all of the voices.

You would do it too to a Drums Bus. There are multiple mics you can have coming from a fully-miked up kit. 9 and above to do the full hog of kick, snare, hi-hat, multiple toms, cymbals and 2 overheads for drum ambience. You don’t want to be fiddling with 9 faders all at once just to lower the drum levels. Route all the drum tracks to a Drum Bus and bing! One fader for the whole kit.

Once I have tidied it up, I’ll post my Session Template for everyone to download and study. I’m dying to damn well fix it!

Hope I have helped you.
Fluffman