Hello All, i am a novice and i am trying to record things on my PC in adobe audition CS6. I can record very feint sound, and then normalise it to -3db to be able to hear it, but the quality is terrible. It is nowhere near as good as it sounds when i play it before recording it. Does anybody know what i am doing wrong? I imagine i am making some basic error but i do not know what it is, please can somebody help? Below i will add a large screenshot of all of the settings that i think may be pertinent (I can only post one image as a new user!)

Welcome to the community @rupert!

It sounds to me that you are perhaps recording at too low a level. When you then amlify your recording afterwards it is also brining up all the background noise too.

I’d sugest to boost your input into Adobe Audition. Using Windows you’d do this in the sound mixer settings.

Hi Mike, thank you, and thank you for trying to help me. Apologies too for my slow reply i had some time off in half term.
I have tried to increase the levels as you suggest and i have had a little success but i still have issues. I will attached some Jpegs to show you what i have done. First in 1.jpg you will see the levels that i have raised. i think that raising the levels for Google Chrome helped the most as that is where i am trying to record from. i have also tried raising the system levels as shown in 2.jpg. i have tried different levels and they do not seem to make much difference to the audio quality. i still need to normalise to -3db, though less so the higher this level is set. i have also attempted to change the audio quality as shown in 3.jpg, but if i try to change it to above 48000 Hz then i get the error message in audition that i have also shown (even if i create a new audio file at the same specification).
I have made a very brief mp3 showing the problem i am having. The first piece of audio is the best quality i have recorded in audition, and the second segment is the quality i get when i play the music i am trying to record in chrome!
If you have any more idea of what i could do to fix the problem please do let me know, and thanks again for trying to help! 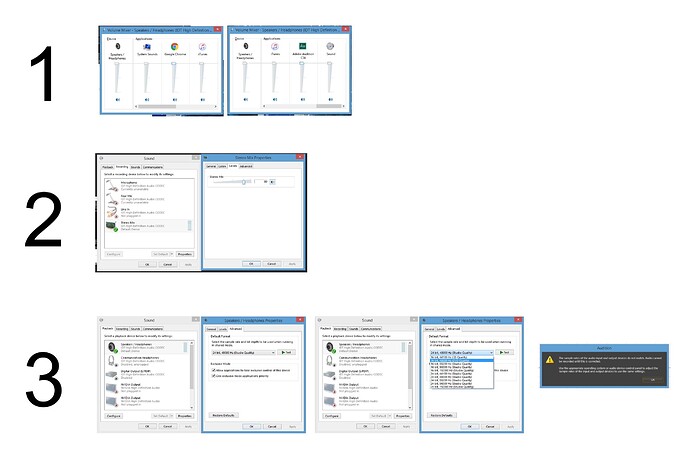